Lottery Winners: 4 Reasons to Avoid Loans to Friends and Family (and the Exception to the Rule) 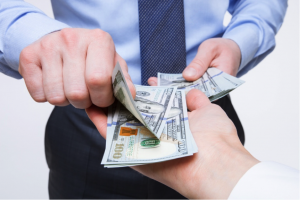 If you’ve recently won a serious amount of lotto money, you’ll likely begin to receive a lot of attention from family and friends – especially in a state like Florida, which doesn’t allow lotto winners to remain anonymous. For good or bad, much of this newfound attention may be because your family members now expect financial assistance from you.

While it might seem harmless at first to give money, gifts, and loans to family members while you celebrate your newfound financial success, doing so sets a bad precedent and can lead to serious conflicts down the line. While you may now be far better off than you were before, your money could run out at some point – unless you’re careful and make smart financial choices.

If you really want to preserve your financial future, you’ll need to adopt a program of saving and investing a critical portion of your fortune while closely monitoring expenses. This means that if you decide to give or loan family members money right after you win, you won’t be able to keep up further payments without seriously hurting your finances. Some of these family members or friends who know you’re well-off may expect to get regular payments or interest-free loans from you – and could wind up disappointed or even angry if they don’t.

So, how do you prevent this cycle of greed, disappointment, and false expectations? It’s simple: As a general rule, don’t freely loan (or give) money to friends and family. It sounds harsh, but it’s really a smart policy to protect both your finances and your relationships from potential disaster.

However, just because you aren’t giving out cash doesn’t mean you can’t still be generous; there are

certain things you can still do to make friends and family more comfortable without breaking the bank – but we’ll get to that later. For now, here are three more reasons to just say “no” to post-lottery gifts and loans:

Unfortunately, when it comes to lottery winners and loans, not everyone thinks rationally. For example, when a new lottery winner’s family and friends ask him or her for a loan, the borrower might really be thinking it’s a gift, estimating that you have enough money, and won’t mind if it’s not paid back.

However, these individuals don’t really know the exact nature of your financial situation; things like your tax bill, any mortgage payments on newly purchased property, and other expenses could mean that you don’t have as much income as people think. Plus, you usually want to get paid back – no matter how much money you have.

If this situation describes you, and a family member won’t pay back a loan, you have two options: 1) accept the fact that you’ll never see the money again, or 2) start bugging them for the money, which is never fun. Asking multiple times (even if it’s totally justified) might lead to tension and drama, and irreparably damage your relationship in the process.

Gaining newfound wealth might also get you newfound attention from individuals with whom you’re not particularly close – or haven’t been in contact with for a while. While some individuals may have selfless motives, others might be expecting loans or handouts, especially if you’ve already started to give money to other family members or friends.

If you start out by making it a policy to not giving out loans or cash, you can politely indicate that as a reason for saying no. But it’s far more difficult to say no if you’ve already developed a reputation as a big giver. A smart policy also means people are less likely to cozy up to you for the wrong reasons.

While it’s true that in some cases, giving can help reduce your tax liabilities (especially when you donate to charity), giving sizable amounts of money to multiple people could significantly complicate your taxes and become more expensive than you anticipated. And giving large amounts of money could also complicate the tax situation of the recipient. If they spend all you give or loan them quickly, they may have difficulty raising the cash to pay taxes on their newly-reported income, which (crazily enough) could lead to them getting angry at you.

At the beginning of this article, we mentioned that there was a good way to give to friends and family members – a method that will keep you from looking like Scrooge, while avoiding the potential conflicts and unreasonable expectations that come with handing out cash.

If you want to give in a productive way that will actually benefit both you and the people you care about, help them with life’s expenses on a one-time-only basis instead of handing out money. People are likely to benefit from (and remember) a payment into a niece or nephew’s college fund, a payoff of their credit card debt, or even a pre-paid insurance plan far more than a wad of cash.

Since you’re not giving them a direct cash loan or payment, people are less likely to expect an encore. And since it’s more personal, they’re less likely to talk about it to other family and friends who might want a piece of the action. Plus, since you’re choosing how the money is spent, you know they didn’t waste it on clothes, cars, jewelry, or other short-term experiences that won’t help them in the long term.

Navigating your finances can be tough, but stick to a few smart rules and you’ll be fine

Going from paycheck to paycheck to millions in the bank can be a massive change. The money can help take care of many of life’s problems, but it can also create a few new ones. And if you’re not properly prepared, you could lose your newfound fortune – or your cherished relationships – faster than you expected.

At NuPoint Funding, we understand the difficult financial choices that many new lottery winners face, and we’re here to help. To learn more about smart ways to manage your finances as a lottery winner or as an owner of a structured settlement, contact us at 1.877.635.3149 or complete our online form to set up a free, confidential consultation.

Did you find apk for android? You can find new Free Android Games and apps.